Elia Locardi is an internationally acclaimed professional travel photographer, Fujifilm Global Ambassador, writer, public speaker and highly experienced educator who spends his life shooting some of the most beautiful locations in the world. Since he began traveling full-time in 2009, he has visited more than 65 countries, flown nearly 2 million miles, and collaborated with major companies, brands, countries, NGOs, and tourism agencies on nearly every continent. 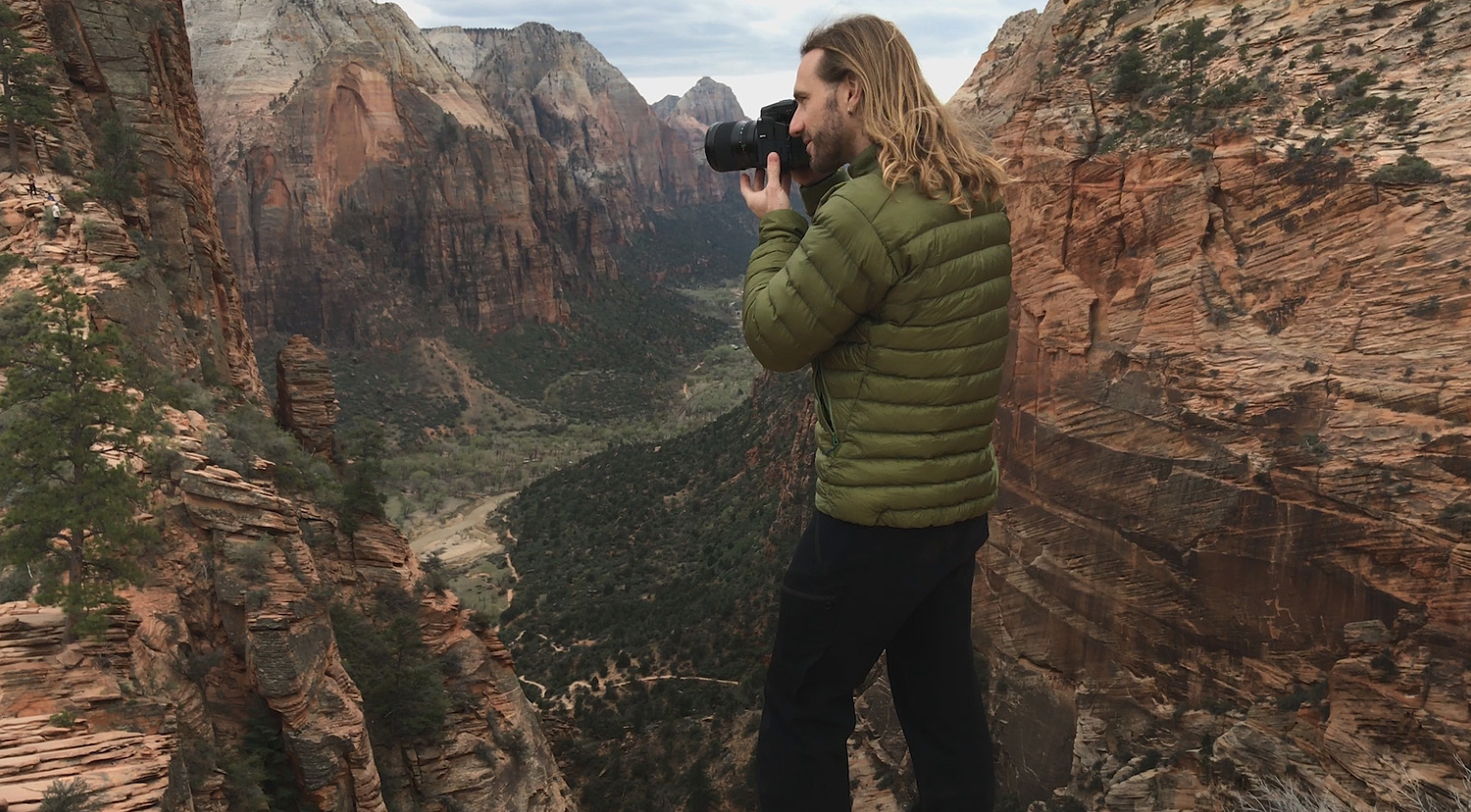 Exploring the Americas
Over the course of the first three Photographing the World tutorials, Elia has explored some of the most beautiful locations in the world including Iceland, New Zealand, Italy, Hong Kong, Cambodia, Dubai, and Singapore. For the Photographing the World 4 photography tutorial, we wanted to visit new locations that both Elia and the Fstoppers crew had never explored before. In this advanced landscape photography tutorial , we are excited to be traveling throughout the western deserts of the United States and the mountains of Patagonia in Chile and Argentina. 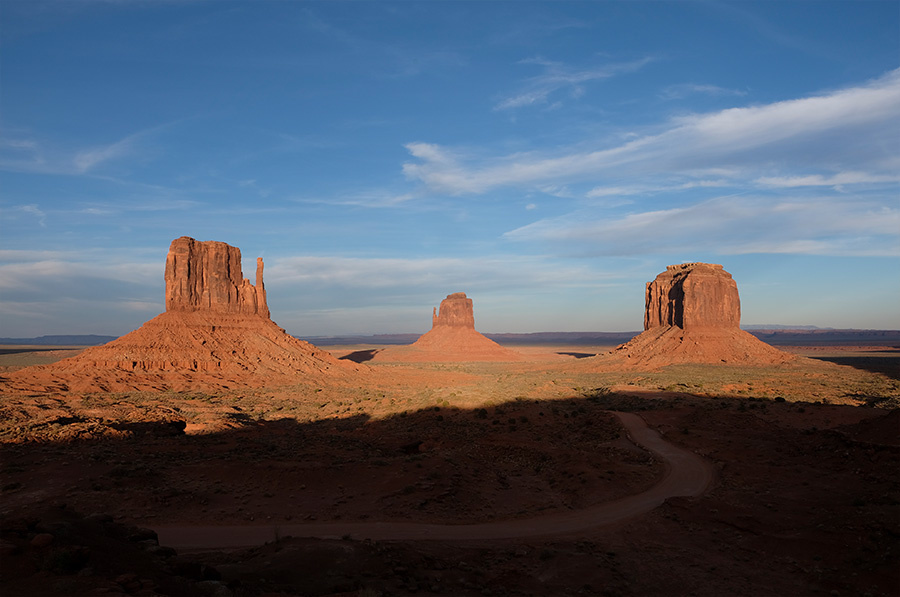 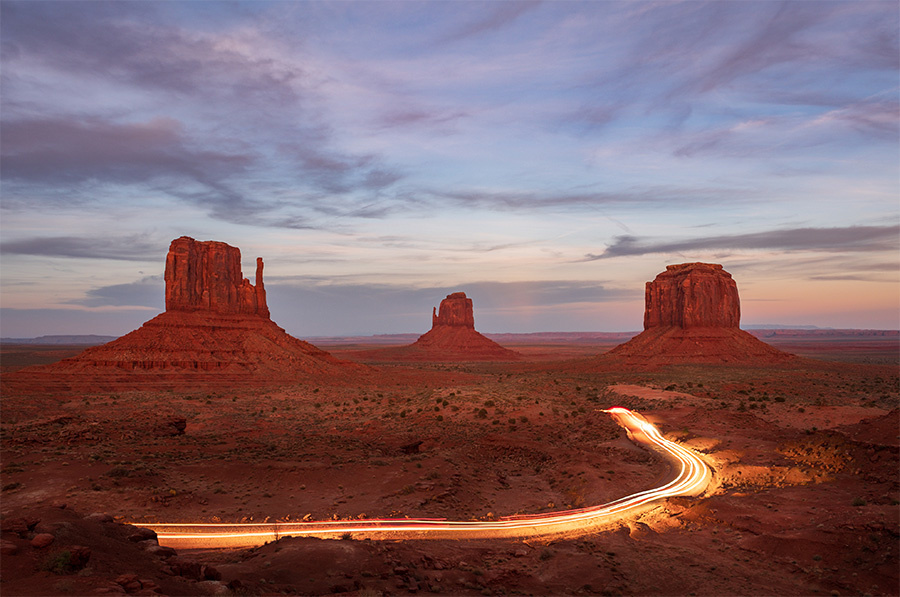 This adventure begins in North America where we explore some of the most beautiful natural wonders of the western United States. Even though Elia Locardi grew up in the United States, he spends most of his time working internationally and has actually done very little travel through the states. So as he explores these beautiful locations throughout Nevada, Utah, and Arizona, you will be able to learn how Elia scouts and sets up his photographs in areas he’s visiting and seeing for the first time. Some of the locations included in this first half of the tutorial include Horseshoe Bend, Mesa Arch, Thor's Hammer, Angel's Landing, and Monument Valley. Even though this tutorial is focused on advanced landscape photography and advanced landscape photography post-processing and editing, Elia spends time during one lesson to break away from the landscape theme in order to demonstrate how he tackles one of the most extravagant cityscapes in the world: the Las Vegas strip. 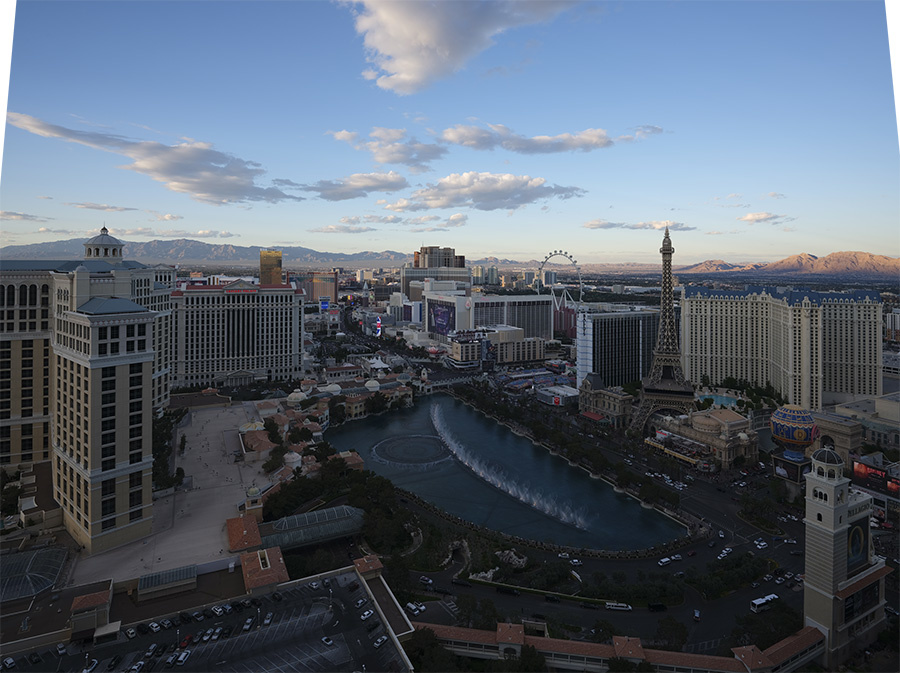 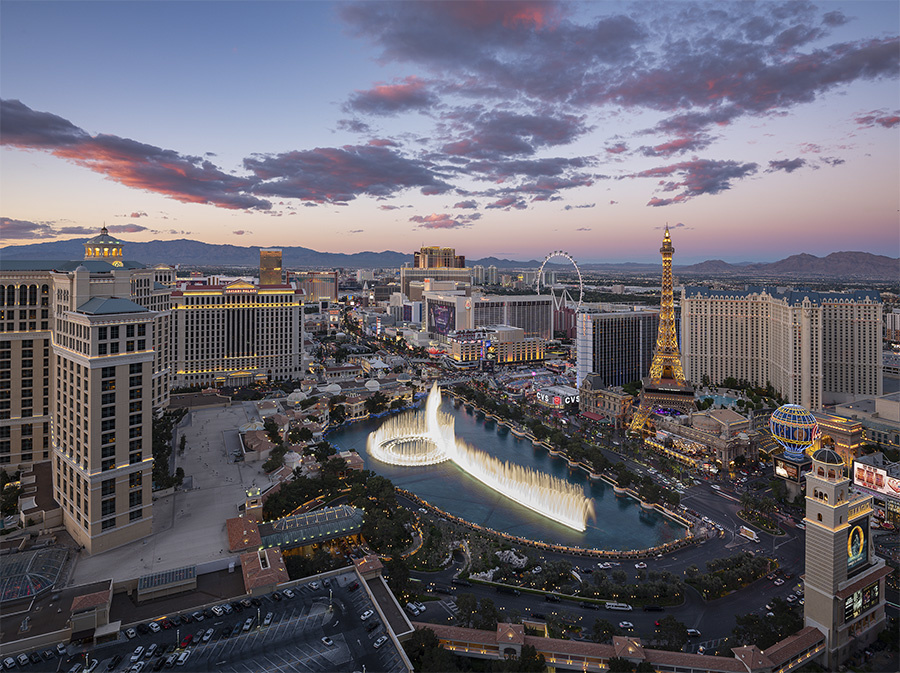 After traveling through western US, Elia changes both landscapes and seasons entirely and flies down to South America. From Santiago, Chile, the crew travels to the the southernmost part of Patagonia to photograph the rugged terrain within Torres del Paine National Park. Here Elia is faced with some of the harshest winds and changing weather conditions he has ever faced during the Photographing the World tutorial production. After photographing the epic mountains within Chile, Elia continues the travel to Argentina as he photographs the grand Fitz Roy mountain in El Chaltén. The journey eventually wraps up back in Chile in the volcano filled countryside of Conguillío National Park. 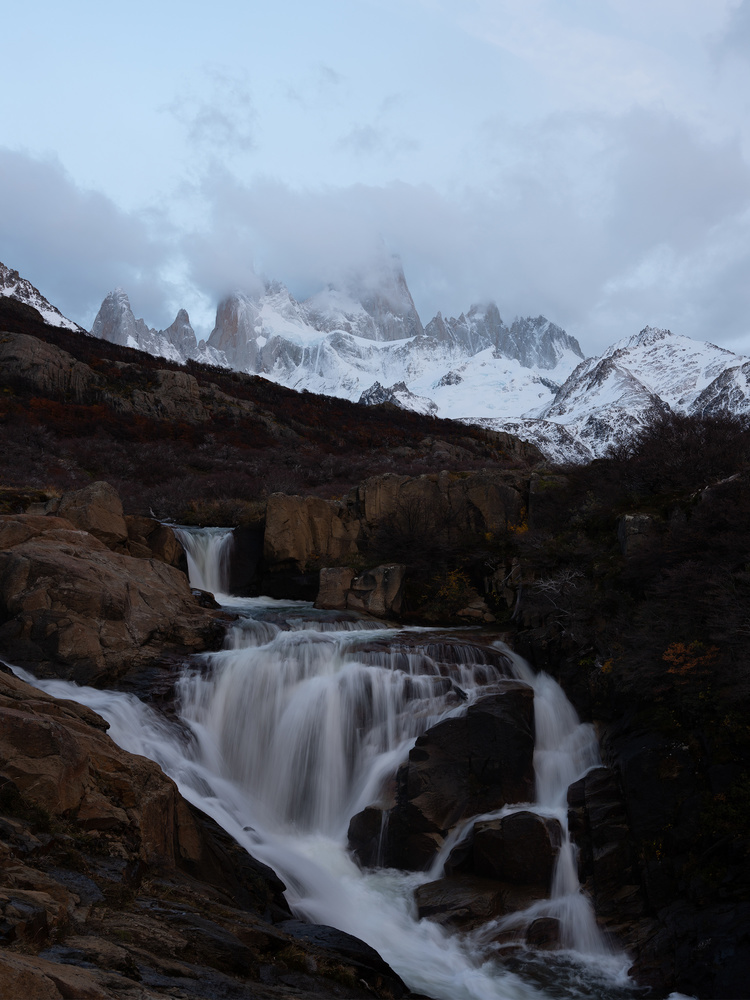 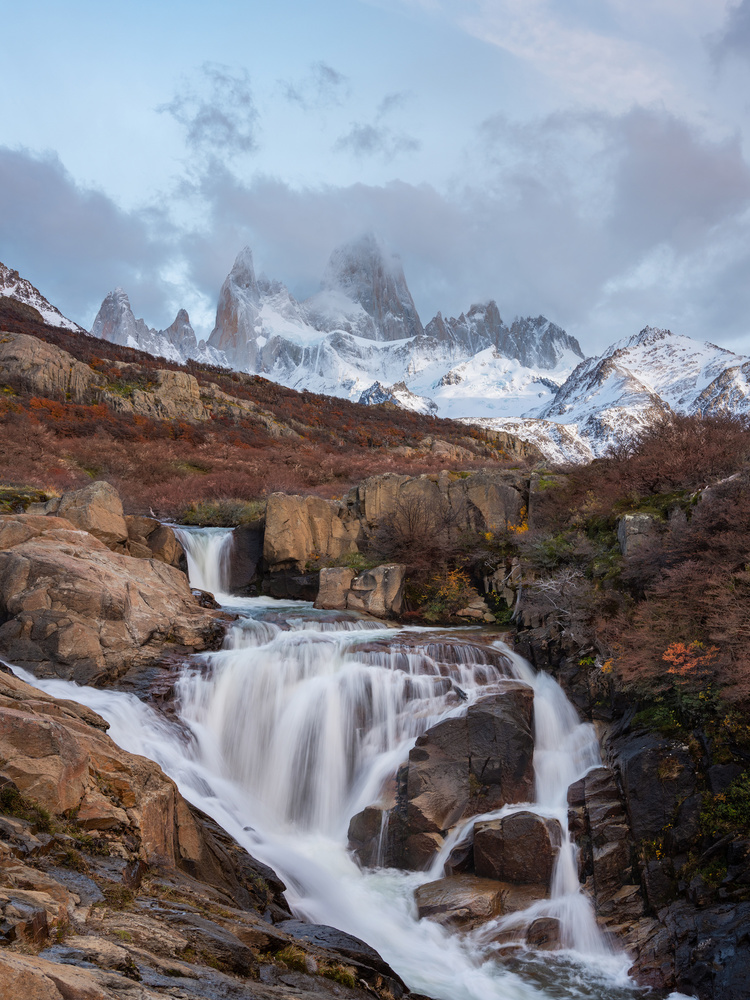 15 On Location Lessons
What makes the Photographing the World series so different from other landscape photography tutorials is you get to watch Elia work on location as he faces the unique challenges that each scene offers. Throughout the course of this adventure, Elia will explore 15 completely different shooting environments and explain what is and isn't working for his process and style. Sometimes common challenges present themselves like dealing with poor weather or less than ideal lighting. Other times Elia is faced with unforeseen issues like excessive tourists, moon light, traffic, intense wind, or nearby light pollution. Unlike other lessons in this series, every one of these locations is completely new to Elia which gives you the chance to watch an experienced landscape photographer tackle all of these unique situations for the first time ever, and walk you through the entire process. 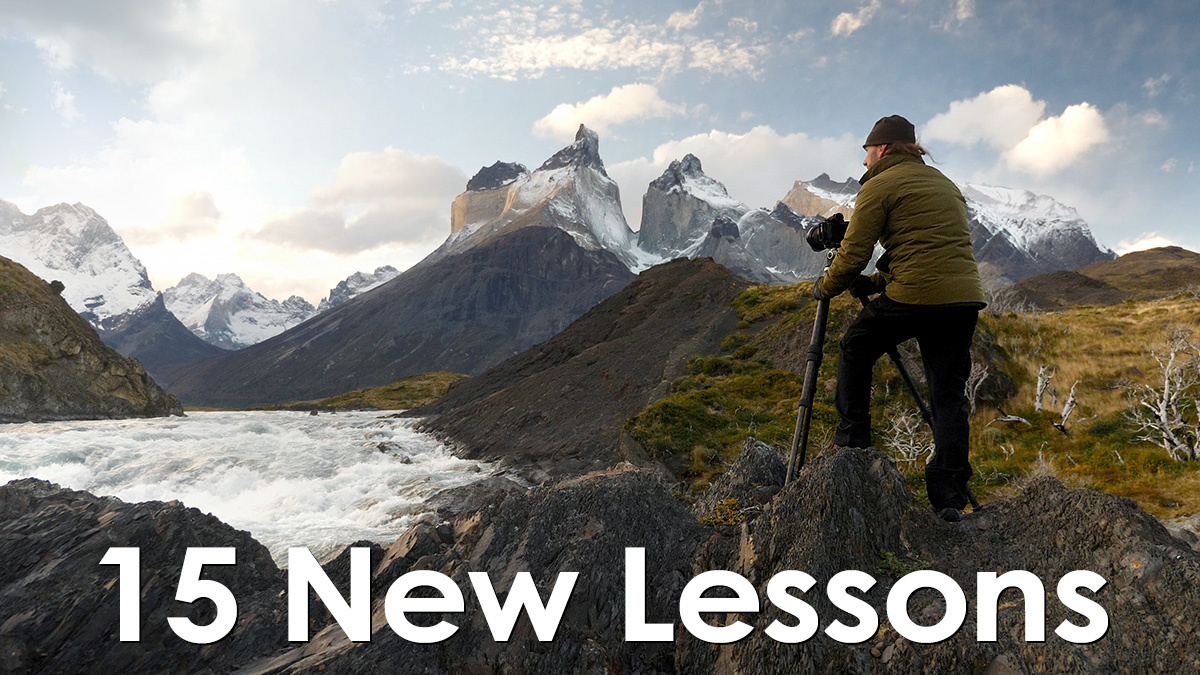 Salto Grande in Torres del Paine National Park, Chile
Throughout Photographing the World, Elia explores new topics and shooting techniques that he has either never shared or that he has perfected over the years. Some of these topics include working with tilt shift lenses to reduce converging vertical lines, creating unique shift panos while also blending moments of time, blending multiple frames from slightly different camera positions to create perspective blended photos, and capturing extreme weather conditions in order to help reveal hidden elements within your scene. In the before and after example below, Elia also teaches how to create seamless multi panel panoramic images with exposures that are not perfectly matched.

Learn Elia's Latest Post Production Tricks in this Advanced Landscape Photography Tutorial Video
Fans of the Photographing the World series love watching Elia work through each photograph live on location, but perhaps the most valuable part of this series actually takes place long after the images have been captured out in the field. After every photo has been imported, Elia then takes you back to the post production studio where he then makes every photo come to life. Although we try to start each of these tutorials off with simple edits so anyone from any skill level can follow along, Elia quickly transitions into easy to learn yet extremely advanced editing techniques.

Whether you struggle with masking in different times of day seamlessly, blending new skies without haloing, adding micro contrast within your mid tones, or bringing color back from an overall dull shooting environment, Elia's mastery of Adobe Photoshop and Lightroom will help you make your own photos look as good as they possibly can. As with most of the Photographing the World photography tutorial videos, Elia showcases some of his favorite software that he uses in his own workflow, but he also teaches how to create the same effects manually if you prefer not to rely on third party plugins or editing panels.