In addition to this week’s massive discounts on the MZed Pro subscription and individual courses, along with the member freebies, the Black Friday “Film School Without Debt” bundle also includes automatic entries into free gear giveaways. Read on for all the details.

A huge thank you to our incredibly generous sponsors – FUJIFILM, Manfrotto, JOBY, Lowepro, SIRUI, SWIT, ShotDeck, and Accsoon. The gear giveaway is only possible because of the generosity of our incredible partners!


Here’s how the giveaway works: every single MZed Pro member who has an active subscription on November 30th will be automatically entered to win the prizes. That means all members – new and renewing – will be automatically part of the giveaway! The drawing will take place on November 30, 2022, at midnight Pacific Time. No purchase is necessary – read the full terms.

What are the prizes? Let’s find out! 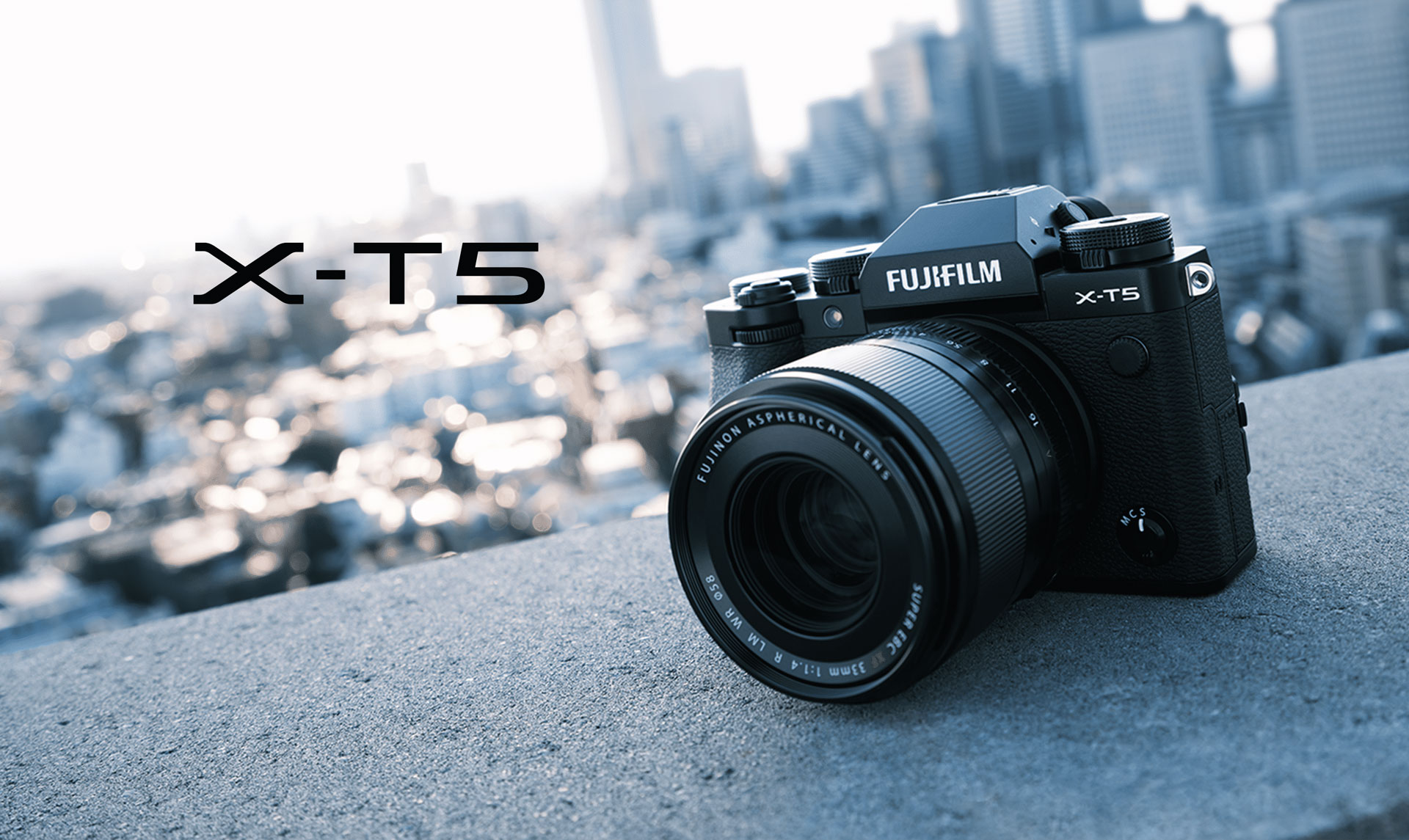 FUJIFILM has only recently unveiled the latest in its acclaimed X-T series of mirrorless hybrid cameras, and it is sure to be an incredibly popular camera for FUJIFILM. And now you can be one of the very first to rock this camera on your next photo or video shoot.

The FUJIFILM X-T5 is the result of five generations of camera development, it’s more compact than its predecessors, it has IBIS, a 3-way-tilt screen, and it can shoot up to 6.2K/30p at 4:2:2 10-bit. You can read more about the X-T5 in our article here.

The giveaway will also come with a FUJINON XF 16-80 F4 R OIS WR lens. It has the equivalent of a 24-120mm zoom range, 6-stop IS and is lightweight, perfect for a wide range of filmmaking scenarios. The combination of X-T5 with XF 16-80mm lens will make one winner very, very happy.

Being able to carry around a fully-fledged 6K cinema machine in a legendary FUJIFILM X-series camera body is truly a joy. Add in the IBIS and tilt lens in a super lightweight body and you’ll be looking for excuses to go out and shoot with the X-T5 and XF 16-80 lens. 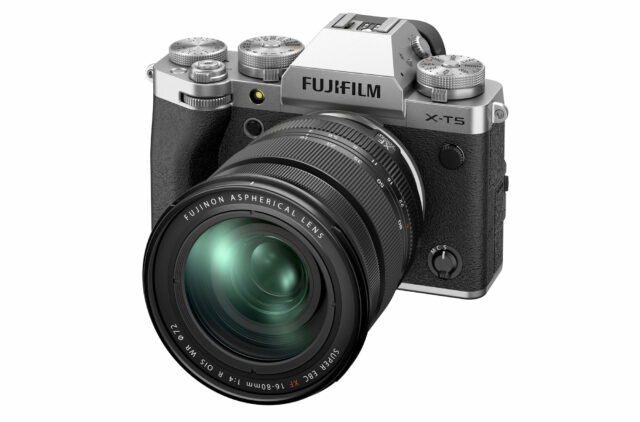 The total value of this FUJIFILM kit is $2,200! All MZed Pro members who have an active subscription at the time of the drawing – November 30 at midnight PST – will be automatically entered to win. 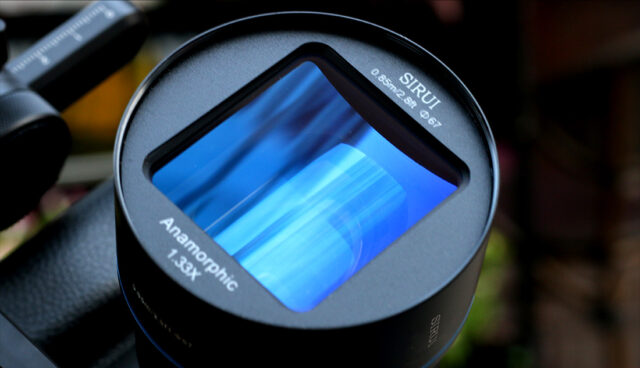 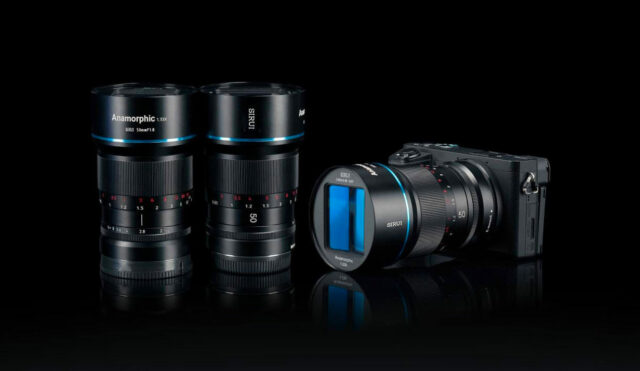 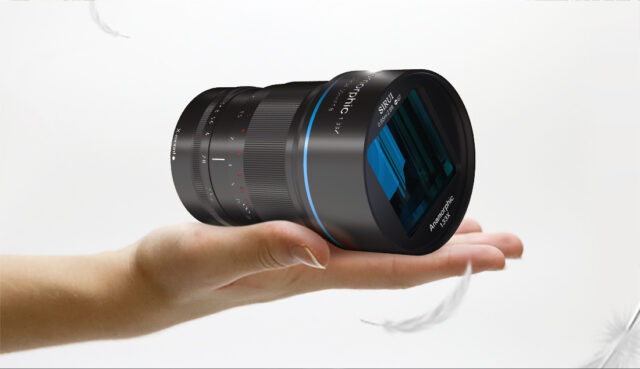 The 24mm F2.8 1.33X anamorphic lens comes in the Micro Four Thirds mount, and the 50mm F1.8 1.33X comes in the FUJI X-mount. Either one of these lenses would be a delight to own and use for both photography and video. Check out those flares! 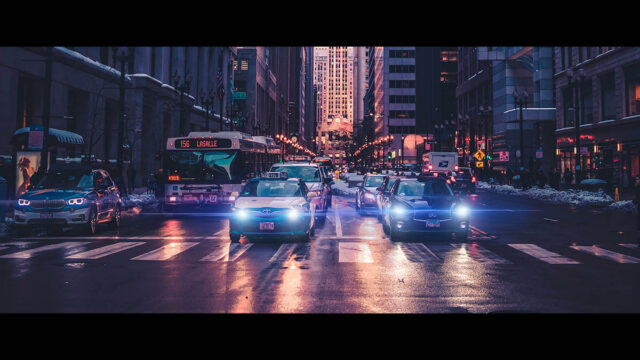 Everyone has long dreamt of using an iPhone or iPad as a camera monitor, but now that day is here thanks to Accsoon! The SeeMo is the world’s first professional HDMI adapter and video capture device for iOS that connects via Lightning or USB-C.

Thanks to the SeeMo hardware device and the SeeMo iOS app, you can power the unit via a Sony NP battery, bring in any HDMI signal, and monitor and record via iPhone or iPad. The possibilities are endless and Accsoon has also opened the app up for third-party development. We’ll be seeing these on every camera rig soon.

Want to learn more about the SeeMo? Check out our recent review.


One giveaway winner will take home a complete filmmaking package from Manfrotto, Lowepro, and Joby! You’ll get one of Manfrotto’s most popular video fluid heads, a two-stage carbon fiber tripod, a Joby Wavo camera mic, and a Lowepro bag to carry everything. The package is valued at a whopping $1,949!


The Manfrotto 504X Fluid Video Head with CF Twin Leg Tripod MS is a professional system that features the 504X fluid tripod head with a leveling ball to adapt the flat-base head to the 100mm tripod, a carry bag, and of course the two-stage carbon fiber tripod. It carries a maximum payload of 26.5 lb, enough for just about any camera you could imagine, but the whole tripod and head system only weighs 11 lbs. 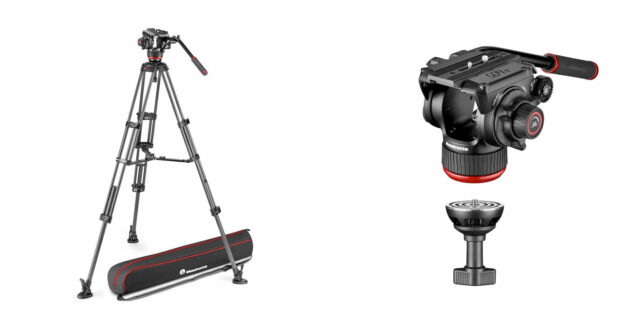 The Manfrotto 504X fluid head has a 4-step variable counterbalance system, a side lock plate, and two 3/8″ connectors for accessories. It has a flat base, which means you can also use the fluid head on top of a monopod, slider, you name it. The accessory connectors are very useful for attaching a light or external battery, taking the weight off the camera itself. And of course, the fluid head will ensure you get a perfect pan and tilt every time. 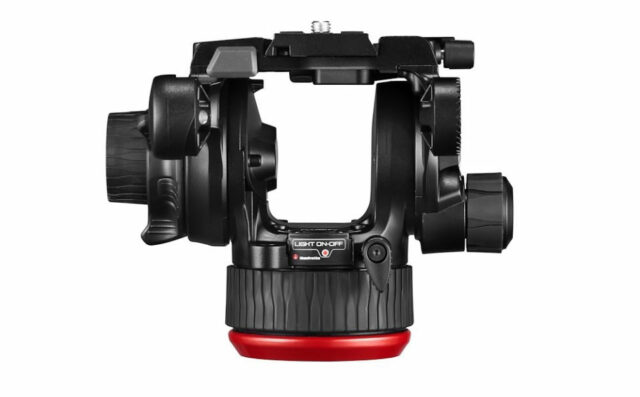 The MVTTWINMC carbon fiber twin-leg tripod comes with a middle spreader, a 100mm bowl with a 75mm adapter for greater flexibility, spiked feet with rubber shoes, and a two-stage system that extends up to 60 inches.


The JOBY Wavo is a camera microphone that is designed for mobile content creators and filmmakers who want a compact mic. It features a super-cardioid pattern, includes a Rycote shock mount, and works as both an on-camera mic as well as a smartphone mic. 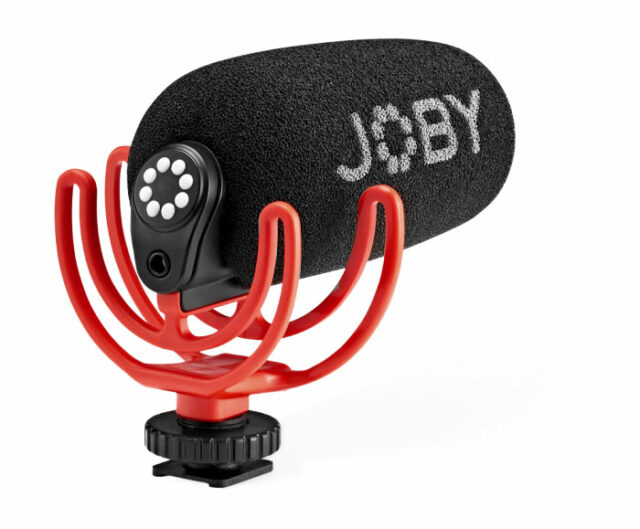 The JOBY Wavo is especially useful for vloggers as it’s versatile for a wide range of cameras and smartphones, and the pickup pattern is wide enough to capture your voice as you move around, while still eliminating background and unwanted noise. It can attach via a camera shoe or a 1/4-20″ connection. And it comes with both a TRS cable for cameras as well as a TRSS cable for phones. Plus it only weighs 1.5 oz so it’s easily coming along with you on every shoot. 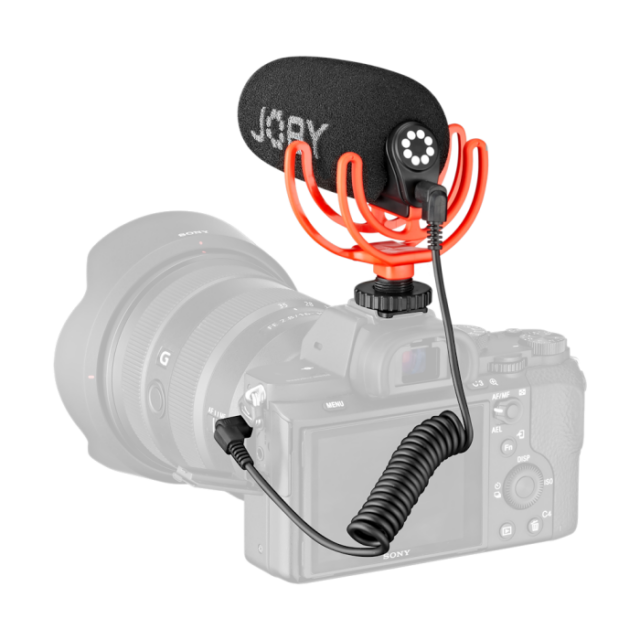 
The Lowepro ProTactic BP 450 AW II is a high-performance, modular photo backpack designed to keep your photo and video gear protected from rugged elements while keeping everything within easy reach.

There’s a 4-point access system designed so that you’ll never miss a moment trying to reach your gear. It has a FormShell build that makes it a durable bag while still keeping it lightweight. And the interior is completely modular so you can adapt it to your own gear and needs. 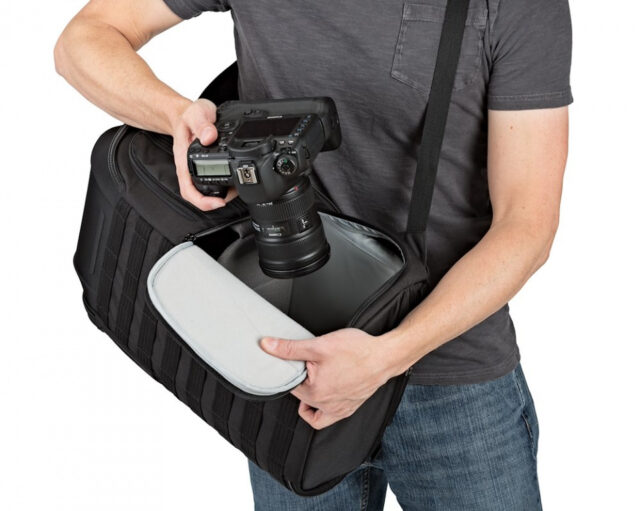 The bag has 25 liters of volume, a laptop compartment, an all-weather cover, a water bottle holder, a tripod cup, quick straps, and a comfort back panel. One unique feature is the waist belt converts into a utility belt that you can wear on its own. 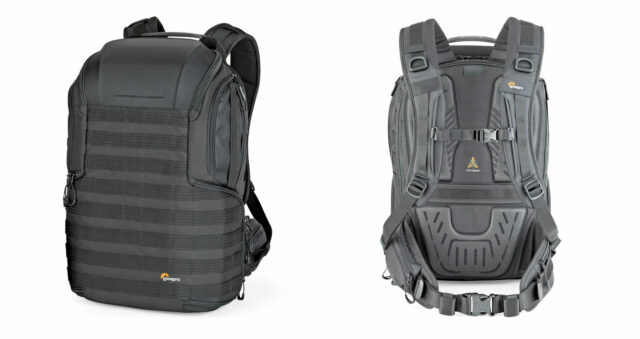 
SWIT’s new VANGO RGBW LED lights are super quiet (no fans), thin and lightweight, and they have built-in diffusers and barn doors for quick and easy setup, perfect for one-man-band video producers. 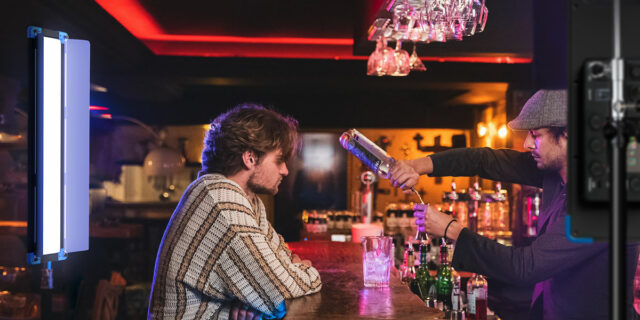 The SWIT VANGO-100L is an ultra-slim tall light (3ft by 0.5 ft) weighing 4.9kg and outputs 100W, but thanks to new time-division technology, this fixture has an output that rivals conventional 300W RGBW lights. It can be adjusted from 2800-10000 Kelvin, along with built-in Rosco and LEE gel modes, plus lots of color-picking options. The onboard LCD enables picking a color super easily, and there’s also a companion app for control via Bluetooth. 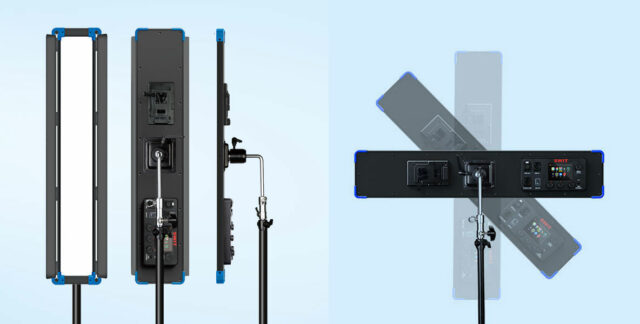 There’s onboard support for V-mount or Gold mount batteries, plus DMX control. And of course, the built-in diffusion and barn doors mean you won’t need to build up this light fixture – it’s ready to go. It has a CRI rating of 96 and a TLCI rating of 93, ensuring accurate color output.

This giveaway package also comes with a SWIT MINO-S140 battery, a 140Wh pocket battery with D-Tap, and both USB-A and USB-C outputs in V-mount (valued at $249). It’s a perfect addition to the VANGO-100L light, but it’s also made to directly fit a RED Raptor.

The MINO-S140 battery has a 12A constant load, perfect for demanding lights, but still small enough to be considered a pocket battery. There’s wire-free internal technology that means everything is directly soldered onto the PCB, which reduces internal resistance, and makes this battery safe and reliable for a variety of needs, whether you’re powering lights, a camera, or your tech devices. 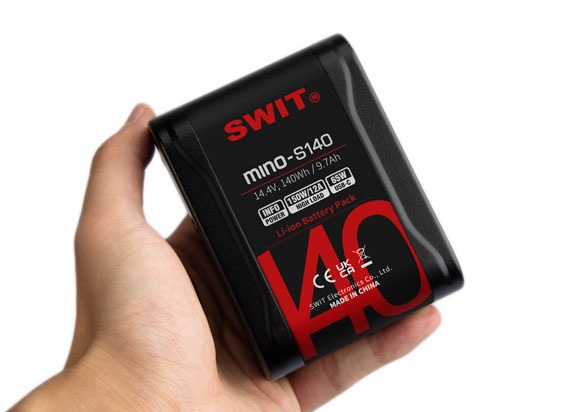 
Finally for this epic giveaway during the MZed Black Friday Sale, we have one more prize that makes this truly a Film School Without Debt bundle. ShotDeck is giving away three annual subscriptions to their incredible library of movie images.

Perfect for bringing your next project to life, you can use ShotDeck to pitch, plan, and prep your film by collecting reference images from over 2,000 films. There are currently 399,833 shots to pull ideas from, so you’ll never have a shortage of inspiration. 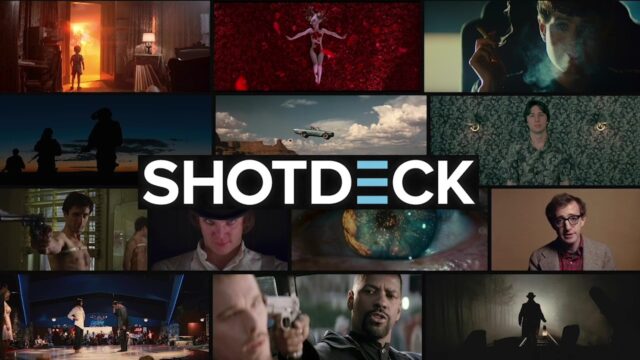 Image source: ShotDeck
All the giveaway prizes, plus MZed Pro on sale for $199 – why MZed Black Friday is the best deal of the year


We’re so excited to offer all of these giveaway prizes to everyone who is an MZed Pro member, so whether you become a new subscriber this week, or you’re renewing your subscription, or you’ve already been a member for a while, every MZed Pro member is automatically entered to win.

The drawing will take place on November 30th at 11:59 pm PST, so that means, anyone who has an active MZed Pro subscription at that moment will be included in the drawing. Entry is also possible without a purchase, check T&C’s for details.

And if you’re not already a member, this Black Friday Sale is the perfect time to join! With over 700 lessons, totaling nearly 400 hours of filmmaking education, MZed Pro is already a spectacular deal. But during our Black Friday sale, you can now subscribe to MZed Pro for only $199! You’ll get 12 months to watch everything in the MZed Pro library, plus we’ve got lots of new courses that will become automatically available to you during your membership. 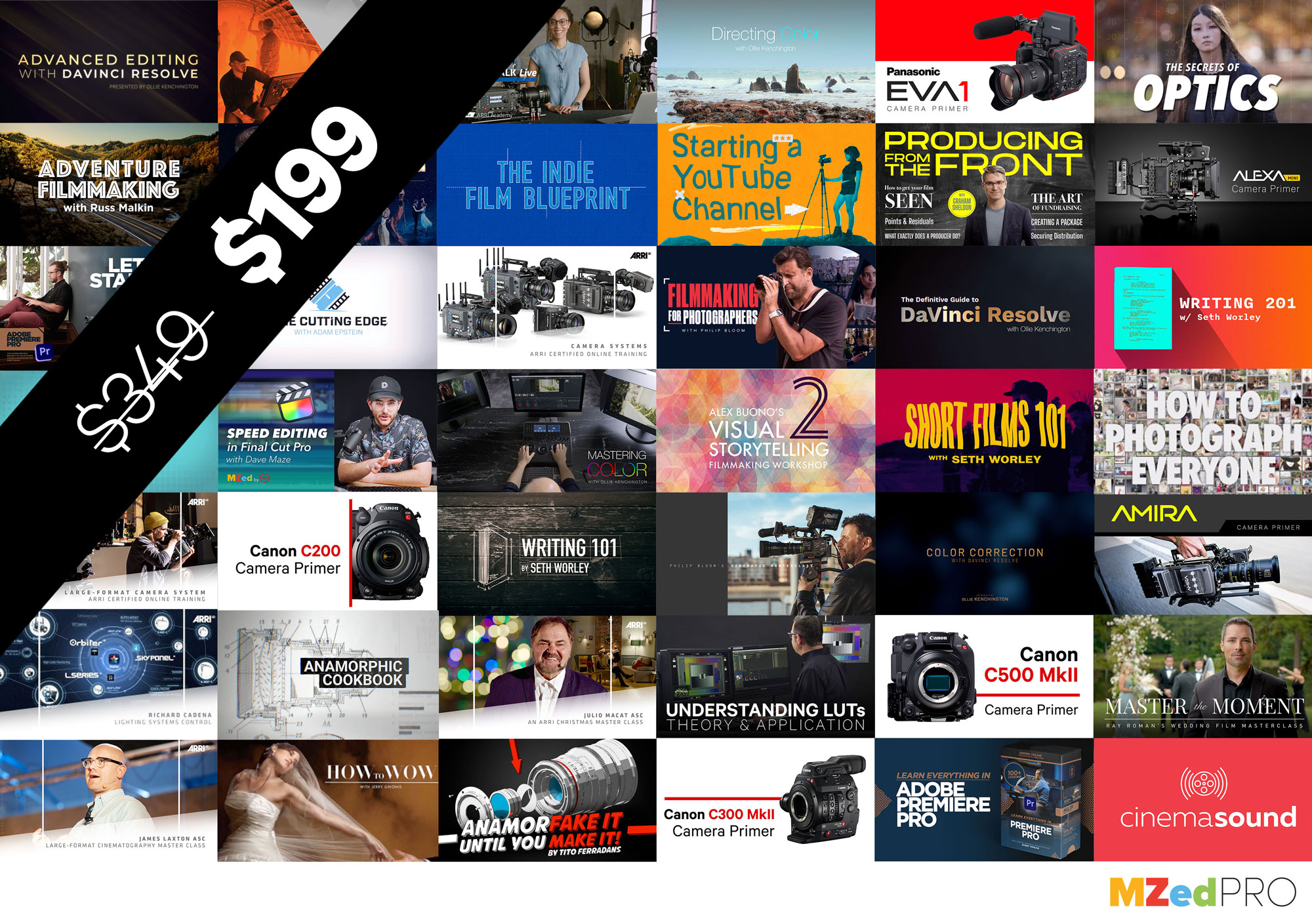 Here’s a quick summary of the MZed Pro subscription:

Head over to MZed.com to learn more about our courses, our educators, and why MZed Pro is the world’s best subscription to filmmaking education.